In the 1880’s a group of twelve musicians formed the Lincoln Orchestra, but by 1902, an increase in the number of members justified the change of name to the Lincoln Orchestral Society. By then the group was giving regular concerts, and in 1910 it joined forces with the London Symphony Orchestra to take part in the Seventh Triennial Festival in Lincoln Cathedral when the composer Sir Edward Elgar conducted a performance of his “Dream of Gerontius”. By the late 1940’s regular symphony concerts were being held and the name was changed to the Lincoln Symphony Orchestra, the name under which it has remained until the present day.

The orchestra has been lucky enough to work with some of the most famous soloists of recent times, including Dame Janet Baker, Julian Lloyd Webber and Lincoln-born Jane Eaglen. Indeed the orchestra had links with Sir Neville Marriner, the Lincoln-born world famous violinist and conductor. Sir Neville was a member of the Lincoln Symphony Orchestra in his youth, and gave his first performance as a soloist with the orchestra, playing Max Bruch’s violin concerto.

In 1997 the orchestra travelled to Lincoln’s twin town of Neustadt an der Weinstrasse in Germany, where several concerts were performed and close links and friendships were forged.

In January 2011, the orchestra was proud to support a Help for Heroes fundraising Viennese Concert at the Epic Centre on the Lincolnshire Showground. Around 500 people enjoyed the music, dancing and a meal before a charity auction was held. The whole event raised over £92,000 for the very worthy cause. That same year, the orchestra celebrated its 125 year anniversary with a special concert featuring a selection of film music, Tchaikovsky’s “1812” Overture and The Planet Suite by Holst.

On the 26th October 2018, the orchestra celebrated its 40th anniversary of working with conductor Neville Turner. In 1978 the Lincoln Symphony Orchestra was struggling for survival when Neville stepped in and revived the orchestra’s fortunes. We look forward to many more concerts with Neville and would like to thank him for the support he has given over the last 40 years. 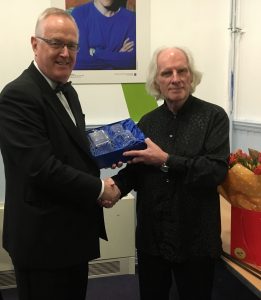 Currently the orchestra performs four concerts a year in November, January, April and June although we often take part in other events with the Lincoln Choral Society and the Newark Choral Society.

The Lincoln Symphony Orchestra is a registered charity (charity number 501664).